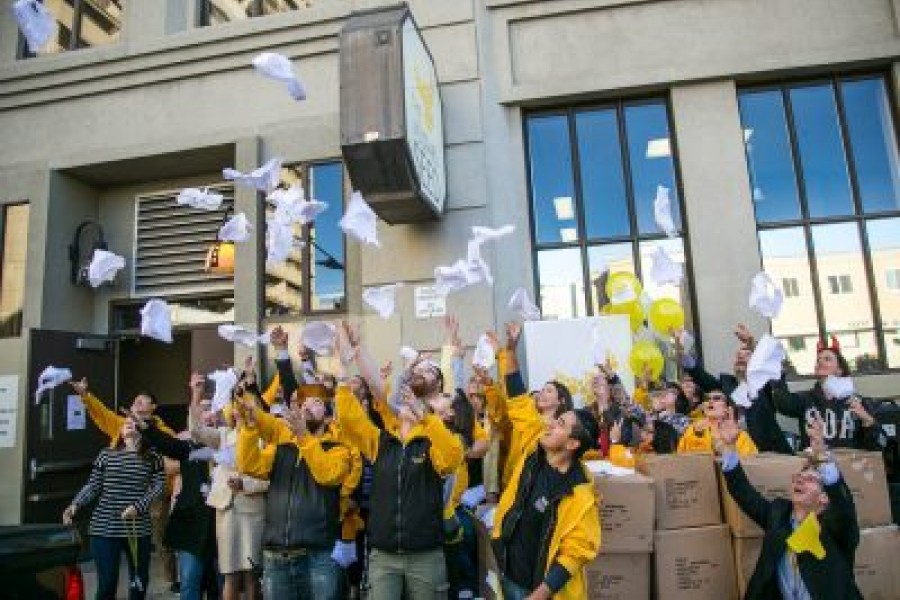 Underwear Is An Ongoing Need at The Mustard Seed

Underwear is an often-overlooked need for people experiencing poverty and homelessness. Food, shelter and clothes are top of mind, but underwear?

The Mustard Seed distributes about 1,000 pairs of men’s and women’s underwear every year in both Calgary and Edmonton. New, clean underwear improves both the morale and health of individuals who sometimes have to choose between underwear and food or transit costs.

For the past seven years, Got Ginch and Need Knickers donated half of our required supply of underwear every year. Sadly, after donating 70,000 pairs of ginch and knickers in Alberta, the campaign has come to an end.

Mustard Seed staff gathered in front of the 102 building in Calgary and the church building in Edmonton on Oct. 15, 2015, to celebrate the final delivery, and to appreciate the hard work, commitment, and accomplishment of Got Ginch and Need Knickers over the years.

The campaign started out of a desire to meet a need that was being ignored. “I reached out to The Mustard Seed, and they told me that men’s underwear was at the top of their wish list,” said Brent King, founder of Got Ginch.

“Having new underwear is a small, but important, step toward restoring dignity.

Underwear was also a primary need in shelters across the country, and so the cross-country underwear drive began, providing 5,000 pairs of underwear to shelters in 10 cities each year. Four years ago, the campaign expanded to include women’s underwear, with Need Knickers.

With the campaign now over, underwear is still a major, often overlooked need for those experiencing poverty and homelessness. New clean underwear contributes can significantly to dignity and self-esteem. You can be a part of the solution by donating new underwear to The Mustard Seed. Visit our website to find out more about drop-off locations in Calgary and Edmonton.

The Mustard Seed would like to thank Brent King, Robb Price and Gabriela Ostendorfer for their years of support through Got Ginch and Need Knickers. They are truly difference-makers!