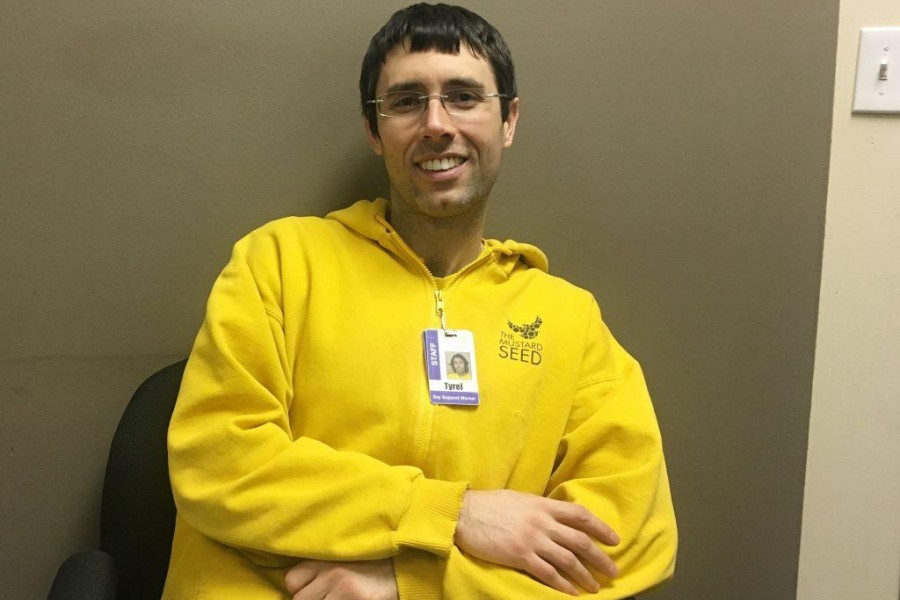 Written by: Tyrel (Exit Strategist at The Mustard Seed Shelter)

“Here I am” (Exodus 3:4). Five years later and I’m still here, still standing by some miracle and the grace from God – definitely not by my own hand. The Mustard Seed (TMS) was never my first pick, not even my third, fourth, or an honorary contestant. In all honesty, TMS and the population we help was never something that had entered my mind to even be considered an option. God changed that.

I remember getting a tour of the shelter during my interview process and having never been inside a shelter before, I was terrified! I looked up at the locker room, the railing above, and my imagination got the better of me: “that’s the catwalk where the guards with shotguns and rubber bullets survey,” I thought to myself. Inside the dining room, guests were cleaning, pushing tables to one side of the room to clean the floor on the other and one of the guests pushed a row of tables so hard that one had toppled over. “I’m going to get stabbed and die here,” was the thought that entered my mind. What am I doing? I went on faith and trusted that God had chosen me intentionally and had not made a mistake somewhere. Then orientation came. I sat in silence as I listened to Cliff Wiebe (a previous director with The Seed). I still remember his passion for Jesus and immediately I felt, “Who am I?” (Exodus 3:11) Lord, are you sure you have the right guy? With no experience and no understanding, I embarked on the five greatest and hardest years of my life.

“Who am I?” That’s an important question that before joining TMS, I thought I could answer honestly and accurately. But I was wrong. Something happened to me during these last few years that can only be explained by divine intervention. Through some incredible events, God brought me to a place in myself where I was willing to accept a job I knew nothing about and even get excited at the prospect of working with TMS.

So yes, there was the “mountain top experience” while I said to myself, “wow God, I’m going to serve you at The Mustard Seed!” But under the hood, very intentional and significant changes were taking place. One year later after the “honeymoon” experience wore off, I was left looking around as Peter did at the waves of chaos (Matt. 14:29-30) and wondered, “what am I still doing here Lord?” I was now fully invested working a job I felt unqualified for and had abandoned what I felt was my original calling. I wrestled. That’s the part neither movies nor stories can convey or recreate – the time and struggle which takes place on these sorts of journeys.

This was my struggle: I found out about myself that when things got tough, I want to run. I want to escape and I do not care about the people who might become affected by my decision to run. In fact, I did not even have the capability to recognize the adverse effects on myself every time I did make a decision to run. Worst of all, it became apparent just exactly who I was running from – God.

So here’s the change. When it finally came time to run again, I found myself unable to do so. I applied for various jobs, even for downtown Mustard Seed positions, but I either never got an interview, or if I did, never got hired. And each time I applied for anything else, in my heart I knew it was wrong. Suddenly, I found myself considering God’s will more important than my own and praying on that. I now had thoughts like, “how can I abandon our guests for my own self-interests?” I had been rendered incapable of running away. This is the power of God.

It’s been a difficult road. On top of the aforementioned “running away” behaviour, I also had to learn boundaries, boldness, courage, grace, and a plethora of other attributes that Christ possessed and asks us to possess as well. Like the fruits (Gal. 5:22-23). Again, what is not always known is the extreme measures God uses to iron out – sometimes beat out – of our character those attributes in us that are not of Him or for Him to get to this fruit. I’ve been lunged at, threatened, shoved, yelled at, and insulted more times than I can count. I’ve seen people deceased from overdose and have had to assist resuscitating guests from an overdose. Each of these incidents has left their scars on my heart. I’ve gone from a man of self-interest to a man of tears and sorrow for our guests and the brokenness that plagues every human being on the face of this planet. But there’s one other thing I’ve also gained. That is abiding (John 15:4 & 9). God has been working on me for one sole reason that takes precedence over all other reasons – Himself. I have come to learn of and lean on my friend Jesus. Of course, I claimed to know Him before, but did I really? No, not truly. My heart has become acquainted with His character and I have gotten to know Him through all this struggle. What better way to know a friend than to walk alongside Him on the same road. And out of this abiding in Him, something else has begun to well up inside of my heart – joy (John 15:11). Somehow, contrary to the world’s process, in the pain, there has been peace and joy.

The Mustard Seed is the best place I have ever worked for two reasons: Christ’s presence, and my brothers and sisters in him. My coworkers are hardly coworkers, they are my family and together we are the body of Christ (1 Cor. 12:27), and the Mustard Seed – at least for me – is not a job but a ministry. Though I still face internal struggles and the occasional external struggles from our guests, one thing is certain: where you go my saviour, my brother, my friend, Jesus, I will go too.