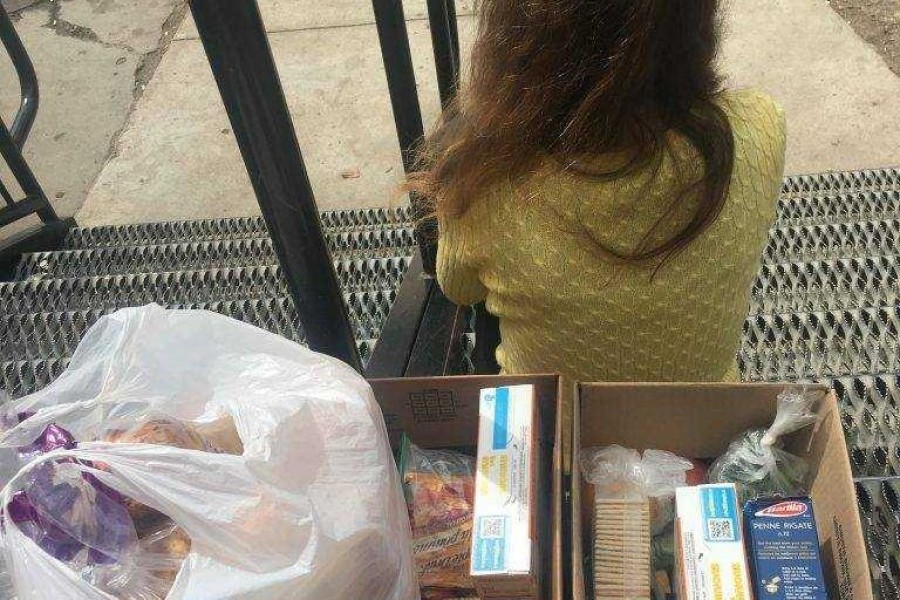 After visiting the Food Bank at The Mustard Seed Church in Edmonton’s inner city, Sarah sits on the steps. Beside her, two boxes of food, cheese, cereal, bread, vegetables and eggs.

“I had nothing left over after I paid all my bills. This food has to last until the end of the month.” It’s mid-month and Sarah says she will have to get creative to make it last.

In line for the Food Depot is Lydia. She’s with her four month old daughter, Judy, who is strapped to her in a baby carrier. Her husband is looking for work after he lost his job in November. The family is new to Canada, originally from Mexico. This day, she’s leaving with something extra besides food.

“It’s hard, extra hard, because of the baby, diapers are expensive.”

Her friend Monica and her chat in Spanish. They talk about the last time they received help from the Food Depot; the time when they received a taste from home.

“I got flour tortillas. It meant something to me, it was a treat. We cooked quesadillas and tacos. I don’t know, it would be very difficult (if The Mustard Seed wasn’t there). I don’t know what I would do, probably starve.”

Cindy, the Food Depot Coordinator says it’s gratifying when she is able to customize a food hamper for different ethnic cuisines or to fit dietary restrictions, such as gluten free.

“It’s heartbreaking when you have to turn someone away. Then we just feel bad, there is nothing we can do.”

Cindy says there are more people who need help from the Food Depot. In summer, often donations are down; there’s fewer items to give to those, who are struggling. The shelves were half full and there is not a can of soup in sight. She says they are close to running out of food.

“Give, please, give to the Food Depot,” says Cindy, adding that while non-perishable goods are great, “cash is king.” Any denomination helps, however, $3,500 donation would mean rice or potatoes for a year.