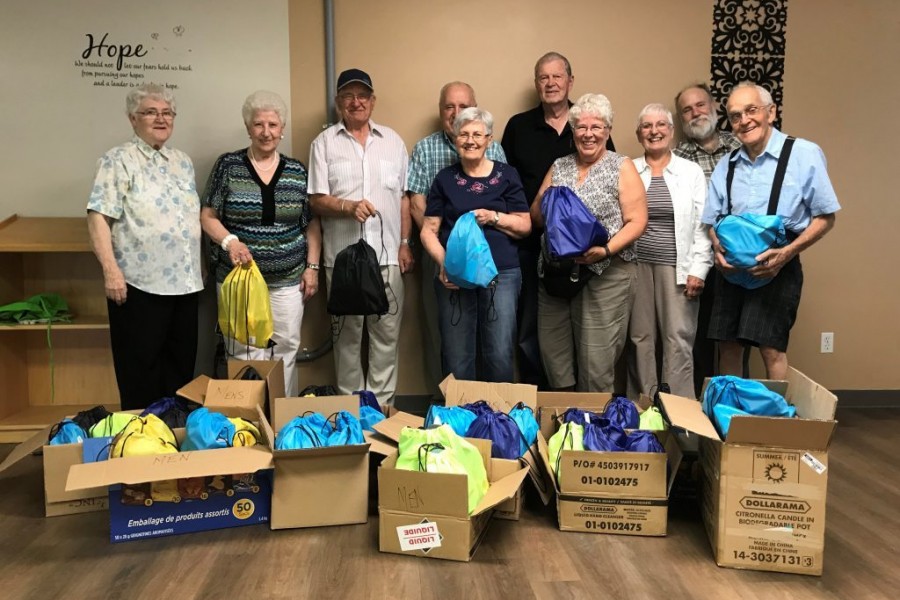 Foresters have Generosity in the Bag

This summer, those living on the streets of Kamloops and those who are low-income individuals who came to The Mustard Seed Kamloops for a healthy meal were treated to a summer gift bag, generously handcrafted by the Independent Order of Foresters (IOF).

“Each year, our group does something special for a non-profit in the community,” said Dick Bartell, one of the members of the IOF. “This year, we decided to help out The Mustard Seed Kamloops, and we’re certainly glad we did.”

The IOF traces its origin to a British Friendly Society, a mutual organization caring for the sick. They expanded into Canada in 1875, attributed to a prominent doctor and community leader named Oronhyatekha, a man of Mohawk descent who was baptized Peter Martin and later attended Oxford where he became a medical doctor. In the spirit of this selfless leader, the IOF still today actively helps communities and organizations in need like The Mustard Seed.

“Our group decided we would put together summer bags for clients of The Mustard Seed Kamloops,” said Bartell. “We made over 100 of these bags which included a basic first aid kit, snacks, sunscreen, bottled water, lip balm, and other items we deem as summer essentials we know many people can’t afford to buy.”

When Bartell and his group showed up with their boxes of items in order to put the bags together, he and his group were struck by the hospitality of the staff and guests.

“When we arrived, we had boxes and boxes of materials,” said Bartell. “As we were getting ready to unload these items, some of the staff of The Mustard Seed along with clients who were visiting in the dayroom came out and offered us a hand to unload everything. We were so impressed with the people who were so friendly and helpful, and it made us feel so appreciated. We haven’t quite experienced that before!”

In total, the group made up 100 bags which were handed out to people who come to The Mustard Seed Kamloops throughout the summer. It has been a great blessing as well to the team at The Mustard Seed as they were able to offer another opportunity to show their guests that the people of Kamloops care for them.

“It’s been a tremendous blessing for us,” said Jeff Arlitt, the Outreach Centre Supervisor. “To have a community group give of their resources and their time to do something so meaningful, needed, and special for our guests is truly wonderful. We’re very appreciative of the IOF.”